Lighting design is a pretty good job- most of the time.  But when it comes to picking out a light bulb for my table lamps, everything goes wrong while costing a great deal of money.

Last week, I decided I would buy a 60-watt equivalent LED light bulb. Instead of standing in the light bulb aisle with a pained, befuddled look upon my face, I would take my clipboard, a calculator, and my decades of lighting expertise with me.  I was going to find the best bulb (read that post here).  After wading through eight different permutations of GE 60-watt replacement bulbs from Lowe’s, I decided that their Classic line was the best offering of the bunch.  It was the cheapest, but lasted just as long as all the others (or longer), dimmed lower than any others, and had a decent color to the naked eye.

But it buzzed and hummed like a hornet’s nest, as did all the others, and when it dimmed it turned a rather sickly grey.  I decided to keep shopping, as I am not a fan of grey hornets.

Yes, a spreadsheet.  I attached it here if you want to drown in the details.  For those of you who are already questioning your sanity for reading a post on light bulbs, I’ll sum up.

None of the 18 LED bulbs, NONE, perform as well as the old fashioned incandescent or halogen bulbs.  They buzz, they dim poorly and most turn grey at low levels.  None of them are silent, at least with the dimmer I used in testing.  Of the 18, only one shifted color as it dimmed to mimic the warm glow of incandescent.  Here are a few words of advice:

The worst: GE Basic, Zilotec, and Sylvania General Purpose.  These were all deceptively overpriced and performed poorly.  Over ten years, the cost was up to five times higher than the winners and the quality far worse.   Please, don’t waste your money. 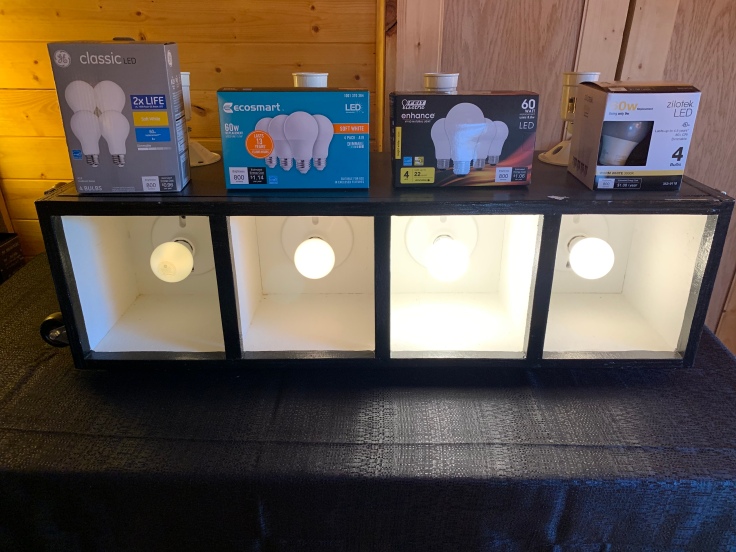 These are set to a very low setting on the dimmer, but note that only the GE Classic appears low.  I think they should replace “dimmable” on these packages with “kinda sorta dimmable sometimes but not really.”

The not-so-terrible: Cree, Ecosmart, & GE Classic.  Each of these had relatively low cost.  Cree features double the lamp life of most and a high CRI (color rendering, a good thing), and Ecosmart was the quietest of them all.  GE Classic dimmed very low and was the least expensive of the three.

The Top Pick of a Rather Disappointing Lineup: Philips Warm Dim.  Amazingly, at the time of purchase the price of these bulbs (in a four pack) was the lowest of the entire lineup, and this helped its 10-year cost be second best of all.  The other feature I liked was the warm-dim feature, which slowly shifts the color to a warmer amber as you dim.  There were other bulbs on sale with this feature, but for about ten times the cost with no other apparent benefits.  I honestly do not know how Philips is getting the price that low, unless it is some kind of loss-leader for them or Home Depot. 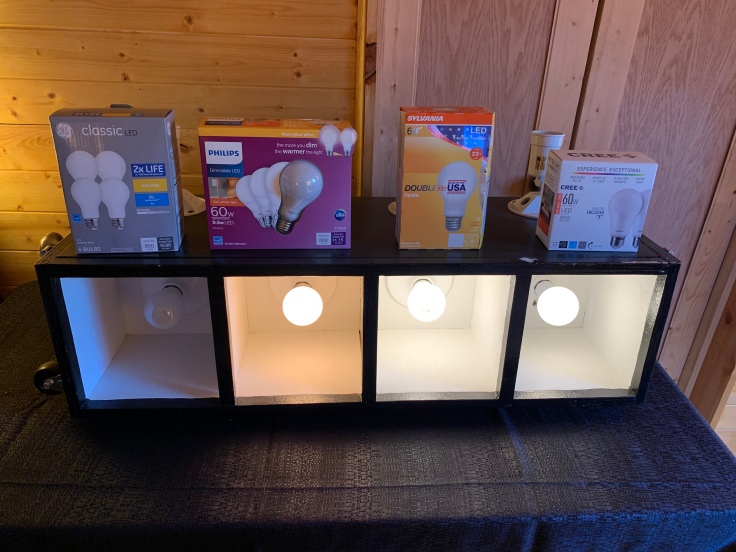 Here it is, folks, the Philips winner second from left.  Note that it shifts color at this low dimmer setting, a great feature at this very low price.   But it should add to the dimming label: “Warm Dimming With a Persistent Buzzing Sound.”

The Conclusion: Wait ten years and shop again.  I’ll hang on to the Philips Warm Dim bulbs and maybe a pack of the GE Classic for closets.   They should last me another ten or fifteen years.

Maybe by then there will be a bulb worth ending my not-so-practical boycott.

PS: A few notes for the geeks like me: